Share
0 comments
We get lots of questions about the overall firing process... fast or slow, open or don't open?  We also understand the anxiety that accompanies firing your kiln for the first time or, trying a new technique. Don't forget, we are glass-a-holics just like you... and, have had a few missteps along the way. With that said, here is a quick look at the stages of firing.  So, the next time you have a question... hopefully, you will have the answer!

Initial Heating from Room Temperature (room temperature to 1200°F range)
During the initial heating, the glass is very brittle and susceptible to breaking if it’s heated up too quickly. Imagine a large notebook laying flat on a kiln shelf, it has a top and bottom surface and four sides. The book also has interior pages... basically, anywhere between the exposed surfaces. If we heat the book... or glass too quickly, the surface area will expand faster than the interior of the glass. This is what creates tension within the glass and, breakage... a.k.a. thermal shock! So, during this stage, it’s best to take a super conservative approach and slowly heat up the glass.

At the end of this temperature range, somewhere between 1150°F to 1200°F, it’s a good idea to add a heat soaking period to allow the project to equalize to the same temperature throughout. Never peek in the kiln during this stage, or you increase the risk of your thermal shock breakage. 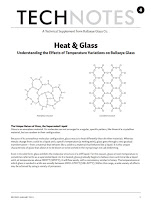 The glass becomes softer and more fluid. During the process heating stage, the glass can be fired more quickly to the target temperature and soaked only long enough to achieve the desired look. It’s important not to hold the project at these temperatures for a long period of time, or you run the risk of devitrification (a visible clouding of the glass surface due to crystallization).

Fast Cooling (1500°F to 1100°F range)
After the finished look has been achieved, it’s important to cool the inside of the kiln and the glass as quickly as possible to stop the firing action so that it “freezes”. During the fast cooling stage, the surface of the glass is cooler and it has contracted more than the heated center which remains expanded, thus introducing stress into the glass piece.

Annealing (1100°F to 700°F range)
At the beginning of the annealing stage, it’s necessary to heat soak the glass for an extended period of time to allow the glass to equalize in temperature throughout and release the stress that’s in the glass. This makes the glass more stable. Then the glass is slowly cooled through the annealing temperature range to better ensure the glass piece is free of internal stresses and is physically stronger. NEVER OPEN THE KILN DURING THIS STAGE! I repeat... NEVER OPEN THE KILN DURING THIS STAGE!

Cooling to Room Temperature (700°F to room temperature range)
After the glass temperature has cooled below the annealing temperature zone, the kiln can be turned off to allow it to cool at its own pace to around 150°F – 200°F. Again, to avoid thermal shock, do not open the kiln until it has cooled down to at least 200°F. Even at this temperature, the glass is very hot, so do not attempt to pick it up in your bare hands. It may look cool but, it's hot! Simply open up the lid of your kiln and allow the glass and the kiln shelf to cool down to room temperature.
Together they comprise a single firing cycle (room temp to room temp).

Get our TOADally HIP newsletter!